Thomas Sheraton, though a journeyman cabinet maker when he arrived in London in 1790, is not known to have had a workshop. It is believed he earned a bare living by working as a free

lance designer to other cabinet makers in London. He died in 1806 leaving “his family, it is feared, in distressed circumstances” (that according to “Obituary with Anecdotes of Remarkable Persons” in the Gentleman’s Magazine, Nov. 1806) . His designs are categorized as late Georgian, but they definitely presage the nascent Regency period in England and helped, as well, to define the Federal period in America.

Sheraton Design Innovations
Sheraton’s designs are generally distinguished by his emphasis on carving and wood turning. To some extent it might be said tht he took some of the Hepplewhite shapes and instead of using inlay as the primary enrichment, he used carving.

But, he also explored and developed new shapes and treatments. The square shape of chair backs; the columnar or turned leg with spiral carving; the leg that stands proud of the carcass of various forms of furniture; the reeding carved into edges and turnings; the convex shape that is often used in case pieces; and the elaborate carved cross stretcher are some of the notable Sheraton innovations

Although Sheraton used square tapered legs, he is most famously known for his turned and reeded legs. His turned legs often had carving added to the top of the leg, sometimes acanthus leaves, sometimes spiral twists following the shape of the turning. Sheraton liked using reeding or ‘twisted flutes and fillets’ to add detail to a turned leg. He used short often turned legs on his chests of drawers instead of a bracket base in the Chippendale or French styles.

Sometimes the short leg would continue up as a reeded column standing proud of the carcass of the chest or sideboard, forming what Americans would call a ‘cookie corner’ when the column intersects the top surface and forms a round projection. He used these carved legs with great effect on pier tables, fold over game or tea tables. On one of his designs of a sideboard he used a square tapered leg, which had a carved column with twisted flute detailing down the middle of the leg and extensive carving added to the top and foot of the leg. (The Hepplewhite equivalent would probably have had elaborate inlay instead of carving to the leg.)

Tables and Sideboards
Pier tables (side tables used generally under a mirror) were delicate, sometimes sporting marble tops, often having a sophisticated inlaid top with 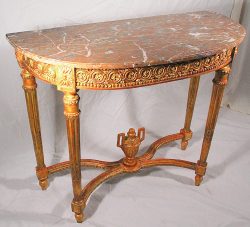 He also liked to add a small platform where the cross stretchers intersected so an urn or basket of flowers could be placed for more dramatic effect. Fold over game and tea tables often had the leg act like a round carved column that stood proud of the skirting. This appeared as a ‘cookie corner’, as the top of the leg added an additional shape to the top of the table. The legs which intersect the top and are fully round and often carved are found on tea tables, game tables, chests and most famously on sideboards.

Sideboards come in a variety of shapes: straight fronted, serpentine, or bowfronted with or without pedestal ends, occasionally a concave center. Sheraton sideboards, if curved have the end curves as convex in shape (Hepplewhite ended his undulation with a concave shape). Sheraton created sideboards that sometimes had four legs across the front with the legs standing proud of the carcass; often reeded, or twist turned or carved.

Sheraton’s ladies work tables were influenced by the French; one of his patterns used an elegant lyre end support connected by a low shelf with brass gallery. The lyre end and brass galleried shelf were to become very popular in the Regency period. He also used a central pedestal with four delicate legs to support another oval work table. 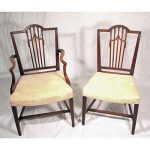 Sheraton chairs are distinguished by having a square back (Hepplewhite illustrated three chairs with square backs, but they were
uninspired to put it mildly), generally narrow top and bottom rails. He also developed a chair with a wider top rail which would become a classic Regency chair. The backs are divided into three sections by vertical elements which can be carved, painted or made plain for a simpler effect. Sheraton shows three chair legs, a round reeded carved tapered leg, a square carved tapered leg and an octagonal carved tapered leg. The feet took on many incarnations but most were of generally spade shaped form, tapered, some carved, some plain. Sheraton and Hepplewhite chairs are smaller in size than most Chippendale chairs, and give a more delicate appearance.

Chests and Other Case Pieces
Sheraton’s case pieces often have short turned and carved feet, instead of a bracket base. These are often continuations of round columns which define the corners and give architectural depth and interest. He also utilized a solid plinth with no cutouts to support his secretaire bookcase. In the design for a library table (his was a solid D-shaped carcass with cupboards, secretaire and normal drawers of complex aspect) he used a solid plinth for the two end sections and a cut out base for the central section. As with most designers, not all elements are original in scope, but how they are utilized and incorporated into a new design, brings about a very different visual effect.

Summary
Sheraton’s original designs borrow much from Hepplewhite and the late Georgian era, many of his pieces are delicate and of similar scale to Hepplewhite’s. He emphasized carving over inlay, turned legs over straight legs. He presaged the Regency period with his lyre end tables, wide curved top backrail of one of his chair designs, more limited use of inlay, preference for mahogany, especially flame grained mahogany. Sheraton influenced American designers like Duncan Phyfe of New York, and Samuel McIntire of Salem, Mass., as well as, myriad cabinetmakers in England.

George Hepplewhite and His Widow Alice

Thomas Chippendale and his Designs